Have you ever wondered what is exercise addition? Is it the same as an addiction to drugs? Do people really have withdrawal symptoms if they don’t workout? 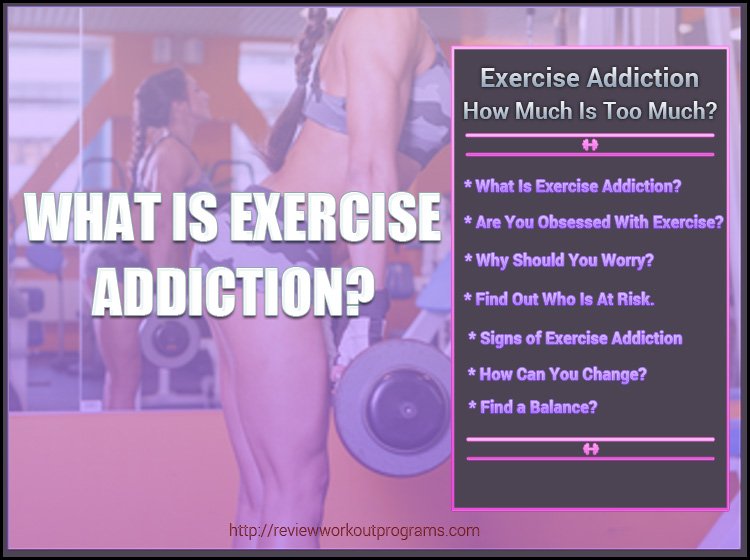 According to some sports psychologists you actually can become addicted to exercise. However, they also say that only a small percentage of people fall into this category. 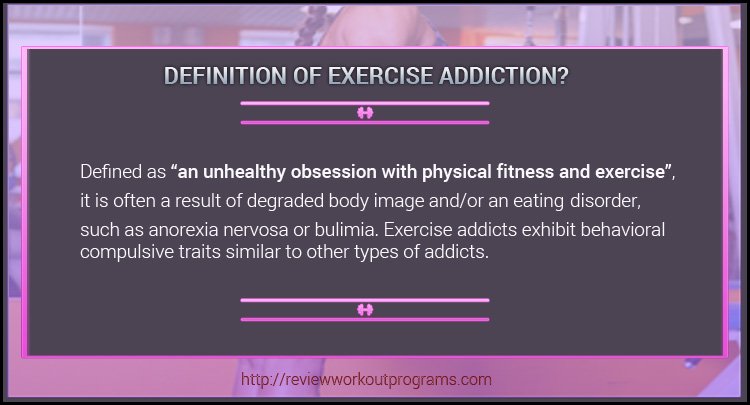 Having said that, more often than not exercise addiction flies just below the radar in comparison to different types of addictions. The problem is defining what exactly is “obsessive” and “unhealthy”.

But make no mistake about this, it might be just as harmful as any other type of addiction for the reason that your mind forces your body to do more than it can ultimately endure. The  outcome – injuries, which often further fuel the obsession to workout even though the body is unable to function properly.

Why You Should Worry?

This kind of addiction has both psychological and physical effects. One of the many physical effects could be a higher risk for injury or even an increased overall number of exercise related injuries. While consistent exercise strengthens the muscles and bones, an excessive amount of exercise adds to the risk for stress fractures.

In women, excessive exercise also increases the possibility for osteoporosis. The reason for this is that when the ovaries make less estrogen when subject to excessive exercise, that leads to reduced bone density or thickness. Anyone who has existing injuries might irritate their injuries and prolong the length of time necessary to totally recover.

Below are a few kinds of injuries caused due to excessive exercise:

An additional physical concern connected with exercise addiction happens to be the female athlete triad. This is actually the appearance of 3 signs or symptoms in women.

These warning signs are listed below:

Exercise addicts can easily be vulnerable to other kinds of addictions. Studies carried out by the University of California concluded that 15% of exercise addicts were actually also obsessed with alcohol, cigarettes,or illicit drugs; they speculated 25% could also possibly be addicted to sex or shopping.

In fact it’s quite interesting to learn a number of previous addicts resort to exercise as being a method for filling a void. That being said if not kept under control, it could possibly come down to trading one addiction for something else.

What Are The Signs Of Exercise Addiction?

Similar to most kinds of addiction, there are a number of telltale signs that you could be hooked:

Generally if the continuously thinking of working out or doing exercises and it’s controlling your daily life, and when starts to have an impact on your friends and family and work, you might have an exercise addiction problem.

Like with most addictions, your body gets “used to” the high with a specific amount of exercising and it might also take steadily more exercising to generate that same high that you’ve grown used to expecting. With most people who are not obsessed with exercising, they receive the same high again and again with the same amount of exercising but you continue craving increasingly more and more.

How Can You Change?

Curing the compulsive craving to exercise is almost the same as curing other different kinds of addictions. First, in case you have other addictions, like maybe a disorder in eating, think about curing that first simply because that addiction might be a driving force behind your exercise addition. Second, rehabilitation can begin only after you acknowledge that you truly have a problem.

When you have the awareness, use self-control so as to modify and therefore reduce the existing length of time spent exercising. Quite often abstinence until such time as the desire has past may well be required. This can take from several days to several weeks or even months.

If you would like to find out more about “what is exercise addiction” and how it’s diagnosed you can learn more from this Source.

What are your feelings and ideas about Exercise Addition? How much exercise is too much? Do you think we should be concerned about it when in America there is an Obesity problem even in children?

Finally do you or anyone you know suffer from and be sure to let us know in the comments below. 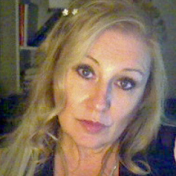 Judith is a professional Freelance Writer, author, artist, web & graphic designer and self-employed blogger. She lives on an island on the West Coast, of Canada where she spends much of her time dabbling in her many pursuits.
Judith Nazarewicz on Google+

Review Workout Programs is a participant in the Amazon Services LLC Associates Program, an affiliate advertising program designed to provide a means for sites to earn advertising fees by advertising and linking to amazon.com.

This website uses cookies to improve your experience while you navigate through the website. Out of these, the cookies that are categorized as necessary are stored on your browser as they are essential for the working of basic functionalities of the website. We also use third-party cookies that help us analyze and understand how you use this website. These cookies will be stored in your browser only with your consent. You also have the option to opt-out of these cookies. But opting out of some of these cookies may affect your browsing experience.
Necessary Always Enabled
Necessary cookies are absolutely essential for the website to function properly. This category only includes cookies that ensures basic functionalities and security features of the website. These cookies do not store any personal information.
Non-necessary
Any cookies that may not be particularly necessary for the website to function and is used specifically to collect user personal data via analytics, ads, other embedded contents are termed as non-necessary cookies. It is mandatory to procure user consent prior to running these cookies on your website.
SAVE & ACCEPT
Loading Comments...
Skip to content